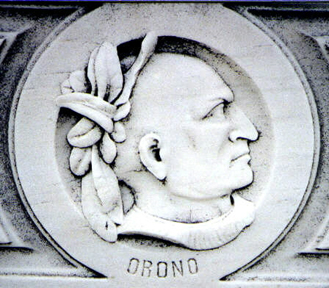 Joseph Orono, (the blue-eyed chief) – Probably no Chief of the Penobscot Tribe has attracted so much attention as Orono and none is so hard to learn about. Joseph Orono served as Penobscot Chief from approximately 1760 until his death in 1801. Chief Joseph Orono was known as the “Blue-eyed Chief,”  and there is a fair amount of mystery surrounding this Chief, both because of his light eyes and because he is mentioned in records when he was a very old age. How long he lived is hotly debated.  Some say that he lived to be somewhere between 110 and  113.  Joseph Orono was the son of one of the Baron St. Castine’s daughters, which would make him the grandson of Molly Mathilde and the Baron of St. Castin. Orono was the great-grandson of Chief Madockawando and comes from a long line of hereditary Chiefs. He assumed the role of Chief at a time of turmoil for the Penobscot Nation. Around the Revolutionary War, Chief Orono received letters from George Washington. Orono was sympathetic to the American cause in the war. In a speech in 1775 Orono said, “Our white brothers (Americans) tell us that they came to our land to enjoy liberty and life. But their king (of England) is coming to bind them in chains and to kill them. We must fight him.  We will stand on the same ground with our brother (the Americans).” The Penobscots had a strained relationship with the English which cemented an alliance with the Americans. This was an important time in Penobscot History. The Penobscot allied with the Americans, and from this time forward, many Penobscot fighters became American soldiers.Orono died Feb. 5, 1801 and five years later the town of Orono, Maine was incorporated.The image above is from the The Catholic Total Abstinence Fountain of the Centennial of 1876 which is located on the campus of Villanova University in Philidelphia, Pennsylvania. The fountain was erected to honor veterans of the Revolutionary War 100 years after the Declaration of Independance.